The European Sustainable Energy Week is the most important policy and networking conference dedicated to sustainable energy issues in Europe. Every year, sessions are organized by the European Commission and energy stakeholders in Charlemagne building and Resident Palace in Brussels to present energy policies, best ideas and practices. In conjunction, a networking event, activities across Europe and the award competition is taking place during this week between 5 to 7 June 2018. Public authorities, energy agencies, industry associations, businesses, civil society organisations and the media are all taking part in the conference, making it a buzzing hub of knowledge exchange, contact making and future policy creation.

This year, PEAKapp project was submitted to enter the competition in the Consumer category, along with hundreds of other local initiatives, research projects and/or industry success stories. On 3 May 2018, representatives of PEAKapp consortium received positive news of PEAKapp being selected as one out of three finalists for the Final Award in the Consumer Category. 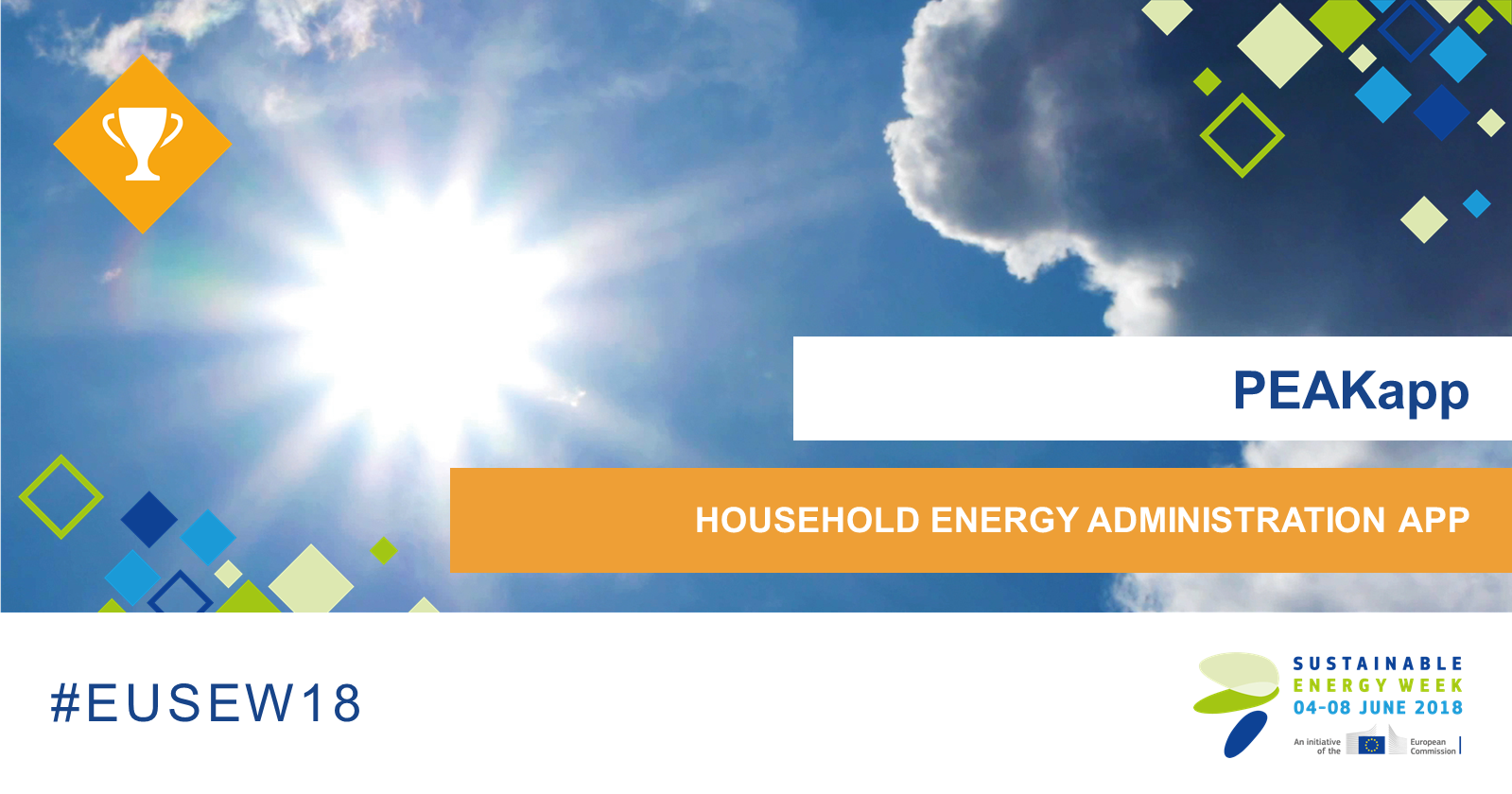 The EU Sustainable Energy Awards recognize most successful and relevant projects with for outstanding innovation in energy efficiency and renewables. From hundreds of competitor projects with a great potential to help citizens, industry and the public sector work towards the Energy Union , selected finalists present their projects on the EUSEW website, get reviewed by the expert jury and enter the Public Vote for Citizens’ Award. Winners will receive a prestigious seal of approval and meet key policymakers and stakeholders at the EUSEW Policy Conference.

Excellence and Innovation: a SMART PHONE & TABLET APP for residential users WITH 8 FUNCTIONS to help manage energy use

PEAKapp project developed a smart phone and tablet application for energy consumers to monitor and save on energy and its costs. The features of the PEAKapp have 8 direct benefits for consumers:

1. Optimizing energy consumption: all relevant key data at a glance, comparing  to own average or previous period and receiving detailed analysis and forecasts,

2. Saving costs: getting informed in case of expected debit in annual payment period,

3. Saving energy: getting informed in case of exceeding consumption limit,

5. Serious Game: getting to know  daily consumption and learning how much energy appliances use,

6. Notifications: staying informed about attractive offers and activities from your utility,

7. Discount offers: consuming electricity if it is cheap, for instance in times of high renewable energy consumption,

8. Illustrating energy records and protecting the environment: Environmental analogies helps to better assess energy usage, for example, the CO2 output generated by energy consumption is set in relation to the number of kilometres for a car journey.

The PEAKapp frontend is a top notch rich HTML5, CSS3 and JavaScript application ready for open source Apache Cordova development framework, enabling the client´s (the utility) programmers to further develop it according to their needs. The frontend has one single responsive code basis and can be easily built for desktop environments as well as various mobile operating systems. It communicates with the backend over a lean interface following the REST principles, immediately turning each click of the user into an action. Customer (utilities) can be offered a widely customizable app mirroring the corporate identity of the company.

PEAKapp dashboard summarizes main consumption-indicators, together with costs, CO2 emissions and saving tips. PEAKapp actively engages the customer with notifications and the serious game – PEAKpoker. The game makes the consumers more conscious about their energy consumption and encourages them to save energy and money by playing with numbers (on their daily consumption). The player is challenged to estimate his daily consumption as precise as possible and optimise his estimation to get as close as possible to his real consumption value by switching on virtual appliances. Once more aware of his consumption and the impact of appliances, the player is challenged to save energy by playing for a value that is slightly under his real consumption value. The player can earn points and compare his results to other players.  The social media connection enables the user to share the household comparison results and PEAKpoker points and discussion on Facebook.

Thanks to intuitive processes and a user-friendly interface, packed in an attractive design, PEAKapp creates a unique user experience for daily engagement on energy saving.

EXCELLENT PERSONAL DATA PROTECTION ENSURED: During all development phases, particular attention was payed to the OWASP Top 10, a list of the most critical risks organizations are facing running web applications. Up to now three independent penetration tests have been performed to confirm the confidentiality, integrity and authenticity of the PEAKapp. HTTPS, metadata token with encrypted part, security framework handling unauthorized requests and REST endpoints dealing with personal data are implemented. The latest penetration test was conducted in cooperation with Energie AG in the beginning of 2017. To ensure and provide a stable and highly secure system, PEAKapp proactively identified and fixed all vulnerabilities revealed in the penetration test, independently of the severity classification.

The reduction of household energy consumption, expenditures for energy and GHG emissions are core objectives of PEAKapp. Defining these quantitative targets incorporates only those potential goals that are judged to be the most realistic, and is proof that a systemic energy consumption and emissions reduction between 15% and 30% is realistically achievable through PEAKapp.

The PEAKapp system was developed in a modular way, which means that it can easily be configured with respect to the specific needs of its provider, such as a distribution system operator or an energy retailer. Additionally, PEAKapp was designed to be fully flexible with respect to the metered medium, so that it can be used wherever smart metering is available, including water, gas and heat. PEAKapp can be customized with logo in the header, background colour, background picture, colour of the sector (power, gas, water, heat), text colour of the header, colour of the boxes contours, Client-specific texts (imprint, terms and conditions, data protection regulations, help, support contact details) in accordance with graphical identity of the adopter. The app supports additional languages like Austria, Russian and Latvian including the time zones in these countries. The app analyses the device language and displays the portal in the device language if the language is part of the supported languages. Additionally to each user, a user language can be set, that these users receive all e-mails in the user language. Therefore, the replicability of the tool is extraordinarily high and allows fits into the portfolio of many European utility companies, no matter whether their background is electricity or any other medium.

PEAKapp will be promoted across the EU in 2018 with demonstrations at InnoGrid2020+, Gamification World Conference, European Utility Week 2018, IAEE European Conference 2018, European Sustainable Energy Week 2018 and possibly World Future Energy 2019. Market uptake activities are supported by finalisation of “Ready-to-sign” agreements, business model, IP intelligence and commercialization plans in 2018. Further on, a dedicated board made up by targeted clients, representatives of public authorities and sector groups will receive tailored-made demonstrations of the PEAKapp.

First preliminary results about its users’ acceptance show satisfactory level of social acceptance.  PEAKapp finds a number of >20% of the users continuously use the app for their energy management. The user acceptance and engagement observed so far clearly exceeds the expectations of the PEAKapp team, and many more and in-depth indicators will proof the engagement enhancing capabilities of PEAKapp once the field tests are completed. The data available already triggered a significant number of specific requests of multi-utility companies, and so far one service contract has been signed (at the project half time!) to utilize PEAKapp in a municipality-level endeavour aiming at increasing the exploitation of locally produced PV electricity though PEAKapp’s price discounting and push-messaging system. The recruiting campaign aimed at residential clients of ENAMO (electric utility company in Linz, Austria) to test the app demo version – through various means of communication including emails and media coverage – took place between 05/2017 and 09/2017. The total number of volunteers applied amounted to 2,000 households of which approximately 400 had to be discarded for either inappropriate hardware (no communicating smart meter) or service (not ENAMO´s client). Until the end of September 2017, the PEAKapp project achieved to bring together some 1,600 households through this campaign and started a “PEAKapp in Österreich” Facebook group for test users. 1,000 households are testing PEAKapp while the rest of the households serve as a reference group for consumption behaviour. Detailed analysis of customer acceptance is to be finalised in 2019.

The public vote for the Citizens’ Award invites citizens to vote for their favorite sustainable energy project by 3th June 2018. Who will win the 2018 EUSEW Citizen’s Award is up to the general public, stakeholders and all interested parties who are kindly invited to take a look at https://www.eusew.eu/awards-public- and vote for PEAKapp!  PEAKapp is the right choice if you and your family believe that everybody can take part in the sustainable energy revolution – by having a smartphone or tablet application. PEAKapp enables clean, green and low-price energy consumption only a finger tap away, gives control to over daily & monthly consumption, enables consumption reminders, receiving discounts from the energy provider, comparisons and much more. Curious how it looks like?

PEAKapp project is coordinated by the Energy Institute at Austria’s Johannes Kepler University  which “is making it easier for households to manage their energy consumption while increasing their use of cleaner, renewables-based energy with their new App – The Personal Energy Administration Kiosk or PEAkapp. Spurred on by the need to boost renewable energy-based electricity consumption in the grid while improving energy efficiency in homes, including low-income households and those Europeans living in apartments with no possibility to install solar panels, the institute believe they have found an answer. ” as written on the European Sustainable Energy Week website. The project coordinator explains PEAKapp for the official coverage in this short video teaser below:

We all can become active players in the clean energy transition. With the help of our smart phone application, we can change our energy behaviour, become more energy efficient and be served by low-price and green electricity in our homes. Johannes Reichl, Project Coordinator at Energieinstitut an der Johannes Keppler Universität Linz

The Awards Ceremony will take place on 5 June, from 11:00 to 12:00, in the European Commission’s Charlemagne building.