Project PEAKapp wishes you a successful and green Year 2017

Project partners from 7 EU countries have all been busy in the year 2016, meeting regularly and carrying out first deliverables which you can find here. We are already digging into new project tasks for 2017 which will bring to life first mobile app version! And not just any mobile app, but an app that will in the long run help protect Earth´s climate and save you some money on that monthly electricity bill!

A quick recap on what PEAKapp is

It´s a mobile application connected to the smart meter of your house. It´s core is that informs you about overall energy consumption of your household on the daily basis, so how much kW your family uses with e.g. lighting, drying hair, washing clothes, using computers, cooking in one day. It´s added features are push messages about renewable (cheaper) energy available and a socially integrated game for collecting loyalty points. Sounds fun? It is! Here´s the first screen peek: 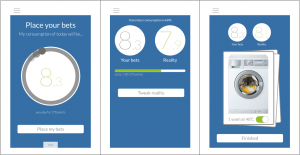 What´s coming up in the next 6 months

PEAKapp is a trusted tool to use renewable energy sources, save money and have fun in your pocket. Because it forwards renewable sources and helps you save electricity, it contributes to Paris Climate Agreement and EU´s Climate&Energy targets.

Want to join the discussion?
Feel free to contribute!